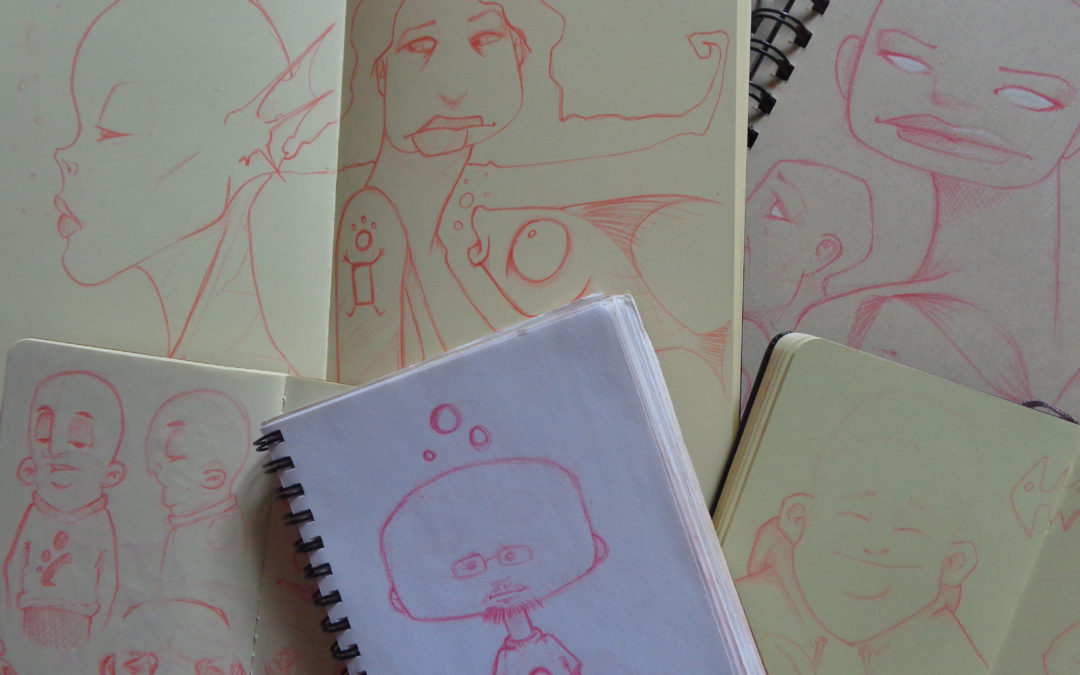 “All art is an intensely vulnerable gesture, and it is made with no small amounts of risk, and fear.”

I was recently working with a large group of designers with years of traditional and digital illustration experience that were extremely new to 3D graphics. They are masters at their craft and produce amazing 2D illustrations, but they wanted to add 3D to their toolset. This is my favorite type of artist to introduce to the world of 3D, having similar roots in design and illustration myself.

Some of the designers were intimidated by this new toolset and quickly became paralyzed by the thought of struggling and making mistakes. One of the artists shared his concerns by saying, “I want to get started, but what if I do it wrong?” Many of the artists had similar hesitations, and this fear prevented them from creating even a single polygon. This caused them to avoid moving forward with 3D, and they returned to the world of vector illustrations where they felt safe. The artists that accepted the fact that they were in unfamiliar territory and had to step outside of their comfort zone started creating 3D models. Their first attempts were rough and contained the types of issues and mistakes you’d expect from someone new to the 3D world, but they were doing the one thing that would lead to better work… they were creating. A few months passed and although all of the artists continued to participate in the training sessions, the artists that shied away from spending time outside of the training, afraid to start, hadn’t progressed their 3D skills and felt that adding 3D to their toolset was too far out of reach. They still had the desire to learn but had convinced themselves it was simply too difficult and avoided spending time creating within the 3D application.

The artists that had been plugging away creating had a collection of 3D samples. Some of the work housed issues that I would label as “Bad” models but all of the work showed massive improvement and was good enough to be used in production. I would even go as far to say that some of the work they produced was far better than the work I produced the first few years I started working in 3D.
So what’s the take away?

Make bad art… make loads of it. Make so much bad art that you start to believe you’ll never create anything good and something interesting will start to happen… you’ll get better and so will the work you produce. I’ve made more bad art than good over the years, but each “bad” sketch, illustration or model I have created has moved me one step closer to producing better art.
Many artists forget to share the fact that they all had to produce “bad” art and loads of it to get to the good stuff. I’m still producing bad art on a regular basis, but every once in a while it leads to the good stuff that I’m proud to showcase.
I’d like to share three suggestions to aid you in your quest to produce “good” art.

1. Make art as if no one will ever see it… then show everyone.

My art teacher in high school once told me that a sketchbook isn’t for anyone else to see. It’s a place for you to explore ideas and practice your craft. That advice allowed me to dive into a new sketchbook without hesitation and flood the pages with sketches. However, I still find myself skipping the first page and leaving it blank… some habits are hard to kick.
While a sketchbook can be a safe place for you to practice and explore without the fear of others judging your work, you need to get your work in front of as many people as possible. Take advantage of the countless resources online that allow you to get feedback from artists of all levels of experience. Share your work with as many people working in the industry as possible, then make more art and share that as well. Work all of the “bad” art out of your system so you can start creating better work.

It feels great to receive positive feedback about your work, but receiving a critique that points out the good AND the bad elements in your work will help you far more. If people give you positive feedback about your work, thank them and ask them if there is anything you could do to make it better. On the flip side, try filtering out feedback that is purely negative that is coming from someone looking to make themselves feel better and has no intention of helping you improve your work.
When you find someone that consistently provides a solid critique of your work, make sure to share any and all future work with him. I have a short list of artists that I always show my work to that are quick to point out issues and ways to improve the work. Their feedback is more valuable than 100 likes on any forum, and it’s their feedback that continues to make me a better artist.

3. Be Inspired by others art…not defeated by it.

It’s easy to get discouraged when you see the massive amount of amazing work being produced and shared online. Don’t let that stop you from progressing and attaining that same level of quality in your own work. Remember that the artists that are producing amazing work have invested countless hours to hone their skills.
I’ve been at this for over 20 years and sometimes feel like a monkey throwing poo at the screen when I see the work of my favorite artists. That feeling of discouragement quickly shifts to encouragement and I become inspired to create better work.
So what are you waiting for? There’s some bad art waiting to flow from your fingertips. But just remember, releasing the bad art makes way for your best work. I look forward to seeing all of it, the good, the bad, and the amazing. But especially the bad.

“Move out of your comfort zone. You can only grow if you are willing to feel awkward and uncomfortable when you try something new.”

Nick Boughen / About Author
Mr. Boughen is responsible for the training of every individual who crosses the CG Masters’ threshold. He employs nearly four decades of entertainment industry experience in continuously developing and delivering this remarkable training program. As a Film Industry Visual Effects Supervisor, he spent many years developing effective production teams as well as technical and administration systems to ensure timely, quality delivery of visual effects. He carries a deep understanding of industry’s need for well-trained, professional commercial artists, not just people who have taken some courses to learn software tools. This understanding is what drove the development of a training system that is centered on real studio operational procedure, team production and best practices. You are unlikely to find a better versed expert in the arts, sciences and procedures of studio production.
More posts by Nick Boughen