“If you think you can do it, you can.” – John Burroughs 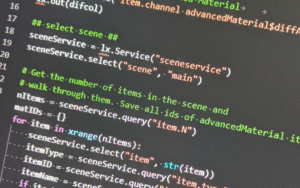 Most of my youth was spent flooding the pages of sketchbooks with doodles and chicken scratch that I proudly referred to as “art”. It did not take long for me to believe that art was something I could “do.” It was something I enjoyed doing, and it was where most of my free time went. Ok, that and countless hours invested in role playing games such as Dungeons and Dragons and Shadowrun. That pretty much meant I had to choose between being a geek or an artist, and being an artist just seemed like the more attractive option at the time. Geeks back then did not have the same social acceptance they do now.

In high school, I disliked classes such as geometry and algebra and grew to believe it was something I “couldn’t do.” These subjects were boring, something I assumed only accountants and engineers were interested in. I saw no real-world use for math as an artist and spent my class time improving my drawing skills instead of factoring quadratics. This close-minded ideology followed me well into my professional career as a digital artist.

So, what is an artist like me doing writing about scripting? It is a fair question and one I would be asking myself if I were you. Like many artists, I truly believed that I simply “couldn’t” write custom scripts. Scripting was something for programmers, not artists…right?

This was a much-needed reminder that there are simply things that I do or do not do. Creating a script was not something I could not do; I just had not done it before. As someone who has taught 3D to thousands of artists, I should have listened to my own advice. If you are passionate about something and put in the time, nothing is impossible to learn.

It turns out, creating custom scripts is just another task that requires creative problem solving. Just like any animation or vfx task, I believe the art of scripting is something anyone can do.

Artists who add scripting to their toolkit will not only grow their skillset, but they will also improve the speed at which they can tackle the creative aspects of their role in production. Scripting has enabled me to shave countless hours off the work I do.

I thought that scripting would make me less creative, but the funny thing is, ever since I started to write custom Python scripts, I have had more time to be creative.  The scripts I have created automate the tedious and monotonous tasks that plague every production artist, enabling me to focus on the more artistic aspects of my work.

If you are looking to increase the speed at which you create and want to enhance your workflow, I highly recommend investing the time to learn Python scripting. It’s one of the most powerful tools in my digital arsenal.

“This knowledge that you might have to really reorganize and redefine yourself and build new skills is really important.”

William Vaughan is an award-winning artist, writer, and director. He has created thousands of original computer-generated characters, including Tofu the Vegan Zombie and has created digital art for many top studios, including Nickelodeon and Pixar Animation Studios. He is currently leading a team of artists at New Balance as the Senior 3D Production Manager.